Lots of really interesting things to read and listen to this past week…..

The always excellent blog on the Irish American Civil War by Damian Shiels had this post on the famous song Paddy’s Lament and its origins and history. The image below is by John Ross Dix and was published in 1864 (Library of Congress). 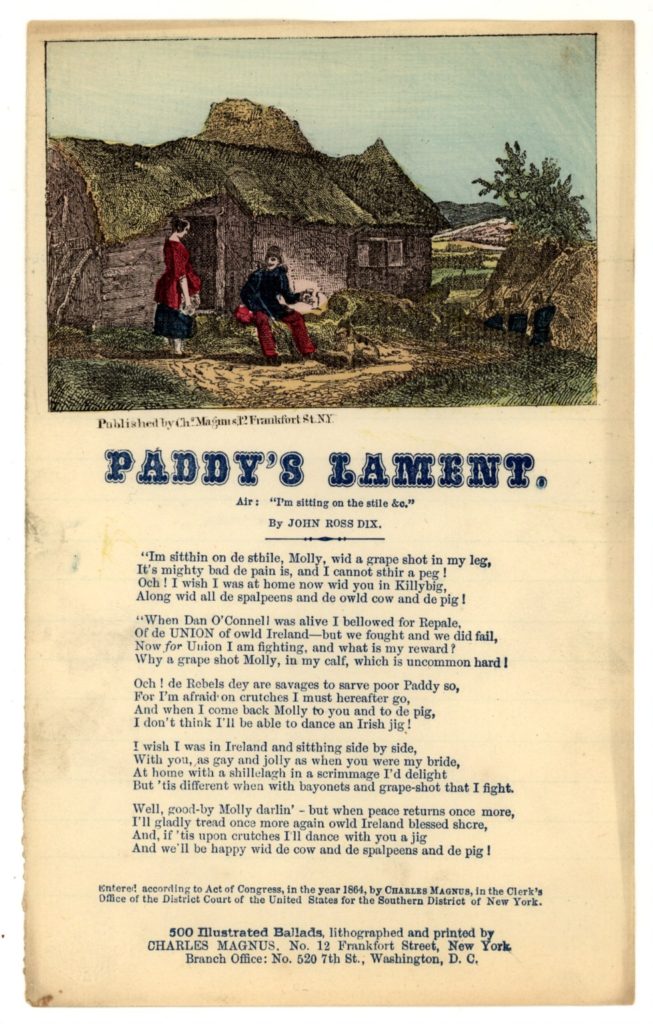 Ireland and the Middle East in the British Empire is the latest podcast from the Irish History Show, presented by John Dorney and Cathal Brennan – an interesting listen and a subject we’d love to return to at the West Cork History Festival.

On his blog, the Irish Aesthete profiled Father Frank Browne, best-known for the photos Browne took on the Titanic’s maiden voyage (he disembarked at Cobh) but a prolific and talented photographer of many other subjects – in fact he took 42,000 photographs in all. This blog post focused on Browne’s photos of country houses in Wicklow, which have been published in new book Wandering Wicklow with Father Browne.

The Oxford Dictionary of National Biography adds new lives each month, and this month’s new ones included Henry Swanzy (1915-2004). A fascinating figure, Swanzy was born in Glandore in Cork and after studying in England, went to work for the BBC Overseas Service. He became very influential in providing a platform for Caribbean writers to make their work better known in Britain via his programme Caribbean Voices. He also lived and worked in Ghana. Henry Swanzy must be related in someway to the painter Mary Swanzy, to whom the Crawford Art Gallery recently devoted an exhibition, and to Oswald Swanzy, the RIC inspector killed by the IRA in Lisburn in 1920 as a reprisal for the killing of Tomás Mac Curtain, Lord Mayor of Cork.

And on the subject of Swanzy and of Cork-Ulster connections, Professor Brian Walker’s talk for our 2020 digital festival has been published in a shortened form by the Dublin Review of Books and can be read here. Its title is Cork, Lisburn and Belfast in 1920: connections, controversy and conflict.

Finally, a really impressive project – the Atlas of Lost Rooms – which aims to contextualize the voices of women in the Magdalene Laundries, and particularly the former Laundry on Sean MacDermott Street in Dublin. The building has been recreated digitally and testimony of some of the women incorporated.

PREVIOUSNEXT
Our weekly updateAlmost too much history this week…..