Skip to the content
+353 (0)87 356 1871
westcorkhistoryfestival@gmail.com
Weekly update of articles to read and films to watch

The Irish Times published another of its excellent Decade of Centenaries supplements this week, this one looking at 1920. Articles that particularly caught our eye were Festival contributor Andy Bielenberg’s piece on the contested and difficult subject of ‘disappearances’ by the IRA, many of which took place in Cork, Linda Connolly writing about violence against women during the revolutionary period, as well as Brendan O’Shea on the burning of Cork in December 1920. 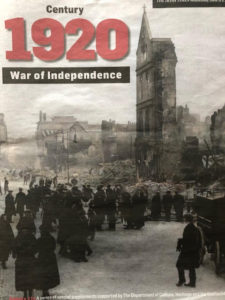 In the week that marked the anniversary of D-Day, we listened to one of The Forgotten Irish podcasts, by Damian Shiels, which he first produced in 2018 and which explores the experiences of Irish Americans and Irish Canadians who took part in the Normandy campaign. Damian’s website highlighting his work on Irish involvement in the American Civil War is definitely worth a visit too.

The Royal Irish Academy is posting a series of short films on its You Tube channel featuring contributors to its book Ireland in the European Eye, which was published last year and features a huge and fascinating range of locations and periods. So far it doesn’t include Thomas O’Connor who spoke at our Festival last year on the Irish in Europe before the 18th century, but I hope his inclusion is planned as his Festival talk was fantastic. Hear it here.

Finally something which mixes literary and historical references – an article in the Independent by Festival contributor Claire Connolly which looks as the Irish love of English literature. It was inspired by the recent TV adaption of Normal People based on the book by Sally Rooney.