The Irish Story featured this on the assassination of Walter Guinness, aka Lord Moyne in Jerusalem in 1944 by a militant Zionist group. At the time, he was British Minister-Resident in the Middle East having had a really interesting military and political career, in Ireland and Britain.

This article by Joseph Quinn in the Irish Times remembered the Luftwaffe’s bombing of Dublin’s North Strand 80 years ago. The photo below is from the Irish Times. 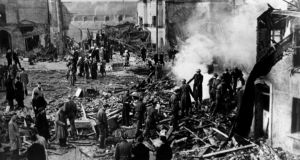 The Daily Mail is not a paper we often feature on this blog, but they did have this recently on a love triangle involving Elizabeth Bowen. Cork gets a mention.

And finally in our last post, we included a BBC Radio 4 podcast series for children – this is one for the grown ups. Also presented by Greg Jenner, it’s called ‘Your Dead to Me‘ and features some great subjects, including Joan of Arc, Lord Byron, PT Barnum and….  Gráinne Ní Mháille.