Our regular round up

This week we have some great pieces connected to International Women’s Day (8 March) and a Decade of Centenaries podcast focusing on events in Limerick 100 years ago.

Cork Public Museum featured the story of nurse and suffragette Violet O’Brien on social media, and appealed for a photograph of her. O’Brien trained as a nurse in Cork and moved to London where she became an active suffragette – she earned the medal shown below for going on hunger strike while in prison, with metal bars to show she endured force-feeding twice. The Museum also has medals she earned in Serbia and France for her work in the First World War. O’Brien was included in an exhibition at the Museum in 2018. 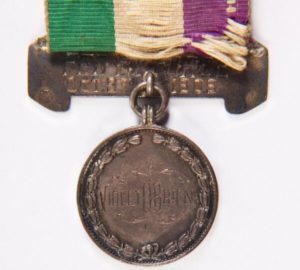 Relating to the experiences of suffragettes in Ireland, The National Archives published a useful guide to sources for women’s history on its website including an online exhibition about suffragettes and prison conditions in Ireland.

The Royal Irish Academy has some excellent online exhibitions highlighting the contribution of women, with this on Creative Women who include Sophia Rosamond Praeger and Katharine Tynan. There are also links to a lecture series from 2018 on five women selected as Honorary Members of the Academy in the nineteenth century – amongst them Caroline Herschel and Maria Edgeworth.

Finally, the always interesting blog on the Ports, Past and Present website recently included this one on The Dublin Time Ball…..  we never knew about Dublin Mean Time, 25 minutes and 21 seconds later than Greenwich Mean Time.