An eclectic mixture of subjects in our latest round-up – 18th century plates, the Anglo-Zulu War, the most haunted house in Ireland, medieval pilgrimage and, of course, the Decade of Centenaries.

Creative Centenaries is a new website which brings together information and resources about the Decade of Centenaries and the work of Northern Ireland’s creative sector in commemorating these events. Its partners are mainly NI-based but include the Irish Department for Foreign Affairs. Lots to read there….

RTE Brainstorm published a piece on the preoccupation with tableware in 18th century Ireland – there are worse things with which to be preoccupied!

John Dorney wrote an interesting piece on the Irish Story website about Ireland and the Anglo-Zulu War of 1879, in which many Irish soldiers died fighting for the British empire. It’s a subject to which we hope to return at our 2021 Festival.

The Ports, Past and Present blog recently has this post on the Welsh Chapel in Dublin, and also a post on the Hook Peninsula in Co Wexford, including the lighthouse and what claims to be the most haunted house in Ireland – Loftus Hall.

All credit to Titanic Belfast for marking Valentine’s Day with a post that mentioned that Titanic love story (entirely fictional) but went on to tell a real life love story from the sinking.

And finally, the always excellent In Our Time on BBC Radio 4 had this fascinating discussion on Medieval pilgrimage.

Here’s our regular round up of interesting historical content to read, listen to and watch, this week ranging from India via Suffolk, Dublin and Cork City to Drimoleague.

The Irish Times had this interesting piece on new research about Sir Michael O’Dwyer, Irish colonial official in British India, who as lieutenant-governor of the Punjab was responsible for the troops who carried out the massacre at Jallianwala Bagh in Amritsar in 1929. The writer Séamus Nevin observes that “British imperialism and Irish nationalism were not then the mutually exclusive binaries many now suppose…”

If you’ve watched The Dig on Netflix, this is an excellent blog post by Sue Brunning, curator of Early Medieval European collections at the British Museum who looks after the treasures from Sutton Hoo and advised on the film. The image below is courtesy of the British Museum, and is of a gold belt buckle discovered at the site. 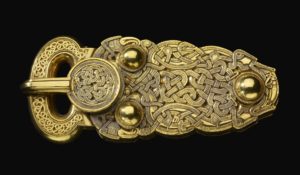 If you are interested in the history of Dublin, we’re sure you’ve visited 14 Henrietta Street. They have produced ‘Teatime Talks‘ inspired by the history and people of the house. Themes include the Dublin Dockers and the 1913 Dublin Housing Inquiry, as well as interviews with guides at the house and a former resident.

The Crawford Art Gallery has produced the fascinating Sculpture Stories looking at some of the sculpture highlights in their collection. These include the Canova casts, pictured below: 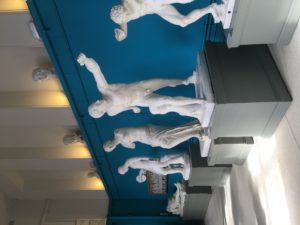 Skibbereen Heritage Centre has the latest in a series of excellent films on local history, and in particular focusing on graveyards, this one on Drimoleague Old Graveyard. It includes the Famine-era mass grave at the entrance.

And finally, Finola Finlay who is on our Committee and who with her husband writes the Roaringwater Journal blog (as well as running our Festival Field Trips) gave a lecture on The Castles of West Cork for Dúchas Clonakilty Heritage which is well worth a watch.