Fergal Keane, who was scheduled to speak at our Festival this year, had an interesting piece on BBC Radio 4’s flagship morning news programme Today last week about the Munster plantations. Click here and you can find it at 2:45:51. He also wrote about his family and the complex legacies of empire on the BBC website.

On the subject of empire, History Ireland re-posted a fascinating article from 2007 on the Irish and the Atlantic slave trade which is worth reading in the light of current discussions about how slavery, and more broadly black history, is represented (or not).

And from the British empire to the Russian empire, History Today had a feature on Cork-born Eleanor Cavanagh. Her letters home from Russia, where her job as a lady’s maid took her in the early 19th century, are amongst the first published Irish accounts of Russia.

Joe Cleary’s article in the Irish Times last week about Irish writers and writing in the 1920s claimed that it was “surely the greatest single decade in Irish writing in English”. Discuss.

Finally for this week, the Michael Collins House in Clonakilty has some really interesting podcasts on its website – including podcasts on Collins himself, the War of Independence and the Civil War. However, we particularly enjoyed Episode 9, by Dr Alan McCarthy, about The Skibbereen Eagle. The newspaper was published in Skibbereen between 1857-1922 and 1926-1929 and became “one of the most famous local newspapers in the world”. 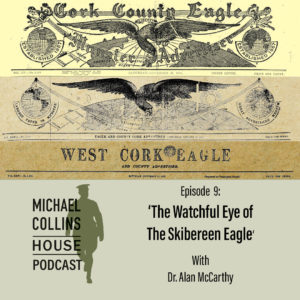